Language on the Move: political review 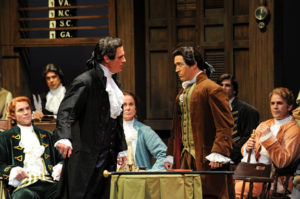 Discourse in Congress as depicted in the musical 1776

I was listening to the radio as I drove a ridiculous distance to a brief site meeting the other day. The reporter was talking about “the Congress” and how they are going to address, or not address, the current issues between the White House and the Russians. And…I’m not going to go into that aspect of politics (phew).

What struck me is the language shift and what it reveals. Initially, before the formation of the USA, the term congress meant a gathering, or a conference. It had the connotation of action and purpose.

A simple Google search yields this meaning, listed 2nd in the definitions. I added the bold.

‘a formal meeting or series of meetings for discussion between delegates, especially those from a political party or labor union or from within a particular discipline. Eg. “an international congress of mathematicians”‘

Once the term “Congress” became the noun and label for the body of delegates, in current usage for a bit more than 200 years, it morphed into a more passive connotation. An elected person becomes a member of Congress. This implies they have completed thier task once the election is complete. The membership is won! He/she has arrived at the destination. This implication has proven problematic and even dangerous. Have we all noticed that the efforts in getting re-elected (including the voting history tied to lobby dollars) are often of greater magnitude than the real work of the Congressman or Congresswoman while serving as our representatives? 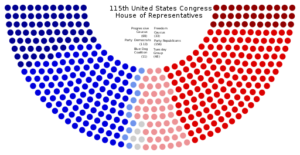 Ideological “map” of the current House of Representatives

And now I am beginning to hear an even more disturbing phrasing. News reports and casual conversation are labelling this body of servants-to-the-people “the Congress”. What’s that you say? This doesn’t change a thing? “The Congress” is very different from “Congress” which can still feel procedural and connected. When something is apart, separate, other than “us”, we have effectively formalized the lack of representation. We have given permission to our elected officials to disregard our concerns. Try reading my last sentence and replacing the word “our” with “the” and you may better be able to understand my concern. It becomes “We have given permission to the elected officials to disregard our concerns.” And why wouldn’t they? They have no relation to us, none at all.

In addition, the divides within Congress are becoming stronger and more rigidly defined. My grade school teachers, once they saw clicks forming, would shuffle the seating assignments so that no one was left out or bullied, yet in our Congress it seems division is mandatory, and even reinforced by seating assignments.

Which came first? I suspect that actions of division came first and now our language is reflecting that. What can we do? I strongly champion the notion that our use of language can have great positive effect, and move us toward the reality we seek. We must remind our Congress of the fact that they are ours, and that their work only truly begins once they have met in congress.

Choose your words with purpose, and be greener,