I biked to Troy again this weekend, the first ride of what I hope to be a weekly endeavor. The farmers’ market is still occurring in Troy, though it is smaller, and it is maintaining social distance by including a waiting line (with 6’ sections) and encouraging reservations. Local stores are open for curbside pickup, preferably by appointment. And restaurants and cafes will serve food to go. I suspect this is representative of what will be the new normal. Not normal, but not strange either.

My bike, after the market, with Albany ahead.

On the trail, there  is an extensive amount of work being done maybe half-way between Albany and Watervliet, NY. It looks like they are adding an additional access point to the trail, and I cannot figure out if this is solely from the highway for construction, or part of a plan to provide access from a walking point from Menands or exactly what is going on. And some internet searching did not really help me learn more.

I had a mix of reactions. First was “Yay, another access point, now people won’t feel they have to do the whole trail from Albany to Watervliet and then back. They can do a shorter bit.” Second was “That’s a ton of money, though. Who is this going to serve and shouldn’t they spend some time making this trail a bit safer – there are so many root heaves.” Third was “Wow, nonessential work. I bet this is going to take a long time.” And then fourth was “Is this really for bicyclists and walkers, or is this a car access for something, like fishing…”

And then a reflection. The bike trail (Corning Trail, now part of the Hudson-Mohawk trail system) was so controversial when first created. It defied the established separation of people from industrial river. Keeping people from rivers happened throughout New England from late 19th century to the 1970’s.

I won’t say the Corning Trail was entirely successful at its start as it only had access points at each end of the first 6 or 7 mile stretch. But it did let us ride and walk alongside the river. It then grew into an opportunity for an outdoor, summer concert venue in Albany, and compelled the city to create a more centralized and celebrated access for pedestrians to get over the highway (curse the 787 connector between Albany and Troy) and the rail lines. There is now a very active boat launch near the Warehouse District and another boat put-in in South Troy, as well as marked bikeways to connect a stretch through Watervliet, into Troy, and then north and west through Cohoes to the Mohawk River. Even with the recent loss of the Barge, a very fun pub on a boat along the Hudson, the park is a valued and active resource for Albany. And it is always changing.

“All or nothing” is a farce.

This is truly the point of this post. All or nothing is a farce. So many people know the famous quote “If you build it they will come.” from “Field of Dreams”. This is absolutely true! However, we have warped this a bit  in our heads with two false connotations.

Both of these assumptions are detrimental to our reclamation of the rivers that serve our communities. They force us to make complete decisions without input from the stakeholders, and they cause us to de-invest or shut things down before they have any hope of traction and success.

Build it – make a start. Don’t worry about perfection, focus on access. Make access possible and the people will inform you of what is needed, what is attractive, what will work in THAT community, at THAT level.

Take the approach of the college that built a quad area but did not provide sidewalks for the first year after student occupancy. The students walked the campus for awhile and the preferred paths became visible, and then it was easy to plan and build the sidewalks that would serve the students best. 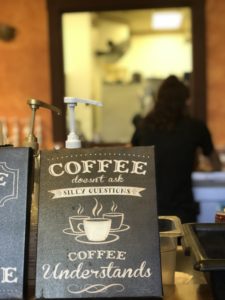 From Spillin’ the Beans in Troy, NY

Let the people, through their use, their activity, their responses, become advocates for the development. As people use the bike trail, they share the fun, they brag to friends, they, like me, maybe tell vendors in another city that they biked over to shop. When an opportunity is presented to add to the trail or to improve what is there, they will speak for it. The businesses will start to cater to those bicycle visitors. The word will spread, the investment will come, and the trail will be loved and nourished, and will in turn support our lives and activity.

Yes, if you build it they will come. And understand this is best as an iterative process where the use of the trail, for example, informs the investment in the trail and its future use.  It’s a bit of co-creation, and understanding of the nested systems. How can we help the neighborhood and those who use the trail to “grow” the trail the way that set serves them? How does the trail enhance the community it serves, the businesses it touches? The answers to both of these questions will strengthen the future of the trail itself. It is never “all or nothing”, unless we succumb to it.