Dakota Access Pipeline, Keystone XL, NED pipeline in New England…everywhere you look there are pipelines proposed, debated, implemented. And this is typically how it goes…no matter the information, the concerns, the burdens of land acquisition, the fact that fossil fuel is killing us, the pipelines are implemented and the plans are growing in scale and reach. I see 23 pending pipeline projects listed at NEFC in 2016 and already five listed in 2017, one of which has a planned capacity of 2,700 MMcf/d (million cubic feet per day). The infrastructure applications and the wealth of concerns stated in comments on the FERC site astound me.

In New England, a recent MA court decision prevented a pipeline project from taxing the electric bills of the state’s residents to pay for the infrastructure to transport a private company’s fracked gas via their intended $3 billion private pipeline. They clarified that the gas would be used to create electricity for state residents, but the projections indicate renewable energy percentages will increase in the mix in MA, which means investing in more pipelines is long-term foolish, especially with broad public taxation to pay for private infrastructure. The NED (Northeast Energy Direct) was going to transport fracking gas from PA through NY through MA to market. This proposal died in 2016 due to heavy opposition as it planned to run the pipe though some of the most sensitive and bio-diverse lands in MA. 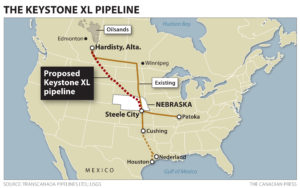 The Keystone XL pipeline will merely transport fossil fuels from one country (not the USA) for sale/use in another country (not the USA) yet all the risk resides where the pipe runs (in the USA). In addition, this pipeline is not even needed as there is an existing line in use. Keystone XL just speeds delivery by cutting off a corner of the existing run. It is also going to ease access to the Canadian tar sands. In the book “Lives per Gallon” by Terry Tamminen, the author likens getting usable oil from tar sands to a drunk going into a bar closed for 20 plus years, pulling up the carpet, boiling it and distilling it in order to have a needed alcoholic drink. That’s the level of insanity in our current addiction to fossil fuels. And though there will be 42,000 or so indirect and direct jobs created during the construction period, only 50 USA jobs will remain as “permanent” and 15 of those are actually temporary contractors.

We are spending billions of dollars on infrastructure to support an industry that we know we cannot afford to continue using, even if the resources were readily available. The CO2 emissions are a danger to us all, no matter who burns the fuel or how.

The Dakota Access pipeline: We have a highly disputed pipeline running though sacred lands and under significant fresh water supply areas to move crude by pipe instead of train. I do respect the desire to improve safety potentially by running piping underground instead of transporting by rail or tuck at the surface, but we need to keep in mind that out of sight is not necessarily safer. In addition, we KNOW for certain that a piped infrastructure is more permanent, more expensive, and much harder to abandon. While trains and tracks can adapt quickly to other load profiles, a piped system cannot. The owners and financiers of this pipeline will do all they can to ensure its use for as long as possible, to make the profits they deem needed for their shareholders, even if it kills us. We are locking ourselves into fossil fuel use for at least the next 40 years when we cannot afford to use fossil fuels at our current levels for even 10 or 20 more. Per the IPCC 5th Assessment Report, as stated in Architecture 2030 site, “The underlying conclusion of the report is that the time has arrived for taking the necessary steps to preserve livable conditions on earth: as quickly as possible, we must stop burning fossil fuels, aiming for a complete phase-out by around 2050.”

The IPCC: “…as quickly as possible, we must stop burning fossil fuels, aiming for a complete phase-out by around 2050.”

So what’s the alternate plan? I have mentioned the Solutions Project site in other posts, and want to again call your attention to it. This is a group that has done the research and the math on investment in achieving 100% renewable energy.  They have looked at costs, benefits, job losses, job creations, land use issues, and health benefits in moving fully off of fossil fuel. In addition, I have done some research of late and confirmed that the embodied carbon of solar panels requires about four years of operation to make up that investment (over a 20 to 30-year confident use life) and for wind turbines in the MW scale this ROI is in the six to nine MONTH range.

Per the intense work of The Solutions Project, If MA transitioned to 100% RE, they would create more than 53,000 construction jobs (of 40-year duration value) and over 37,000 operations jobs. They’d need 40% less electricity, as losses due to transmission would be significantly less due to more on-site generation and subsequent point of generation use. They’d avoid 8.2 billion dollars in healthcare costs each year, costs directly tied to emissions and poor air quality due to fossil fuel burning. The avoided healthcare costs would pay for the transition to 100% renewable energy within five years.

Show me what any pipeline infrastructure investment will do, better than this. 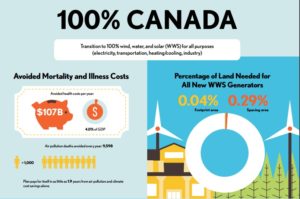 Oh, Canada – I admire the Right Honorable Mr. Trudeau tremendously, except for his inexplicable support of fossil fuel industries and infrastructure. Maybe this information would help him to see our more successful future with RE. In transitioning to 100% RE, this is what The Solutions Project predicts for Canada.

In summary, I welcome you to illustrate for me the benefits of investment in fossil fuel infrastructure, if any do exist, because I’m not seeing them, except to the specific energy company that owns the pipe and/or the mined/fracked/distilled fuel. There is no benefit to our health, no simplification of the demand and use flow of energy, no potential for improved resiliency, no significant job creation, no support of our communities and cultural history, no respect for bio-diversity and ecologic support, and no certain future for any of us as CO2 emissions MUST be reduced and the sources of fossil fuel are decreasing regardless.

Let’s seek the solution that creates no new problems,